In addition to falling prices and piracy, the Spanish sector is also awaiting clarity on the new set of rules to regulate catching in the Indian Ocean in 2018, after 2017's controversy over the quota.

"The ships have gone back to sea," a source at a large Spanish fishing firm told Undercurrent News, referring to the Indian Ocean. "All Spanish are back fishing," another source confirmed.

However, the boost from resuming fishing is being partially offset by falling prices for skipjack, as well as the threat of piracy. In Bangkok, Thailand -- a global benchmark for skipjack -- prices are continuing to decrease and have dropped to $1,550 per metric ton for January deliveries, having been at $1,700-1,750/t for December, according to Undercurrent sources.

The kidnapping of the Basque tuna vessel Alakrana in 2009 and its subsequent liberation after 47 days of captivity off the coast of Somalia continues to linger in the memory of those in the Basque tuna sector, according to Deia.

A few days ago, Gibele, an auxiliary vessel of the Basque company Atuneros Congeladores y Transportes Frigorificos, know as Atunsa, had a run-in with pirates in the waters off Madagascar.

After a chase of about an hour and a half -- in which one of the skiffs got two miles from the auxiliary vessel -- the pirates apparently abandoned the chase.

Meanwhile, the Spanish fisheries ministry is in the process of producing a new set of rules to regulate the fisheries, following criticism last year.

The new set of rules, of which a draft was submitted for consultation in December, follows a statement last October by the Spanish national association of tuna freezer vessels, Anabac, expressing "its total indignation" for the country's tuna management in the Indian Ocean.

"It is very likely that in the near future some legal text that regulates the fishery in the Indian Ocean will be published," one of Undercurrent's sources said.

"We imagine that [the published text to manage yellowfin tuna fishing for the tuna purse-seine freezer fleet in the Indian Ocean, for the 2018 campaign] will be in the line with the draft order,” he added, referring to the draft order submitted for consultation last December.

In the document, the Spanish fisheries ministry (Mapama) pointed out that clear rules were needed to avoid a repetition of 2017.

In 2017, "representatives of the fleet were asked to agree on an internal model to limit their catches and reach the end of the year without restrictions", but high catches "by the whole fleet made it necessary to proceed with a definitive closure of the fishery on Nov. 5, 2017", Mapama said.

To prevent the situation recurring in 2017, the Spanish fisheries ministry aims to "guarantee the sustainability of the resource and allow, at the same time, adequate planning for the fleet operating in this fishing ground".

Therefore, it considers it necessary to establish an individual limit of catches for the 2018 campaign, it said in the draft document (see below a proposed list of tuna seiners' quota limit for 2018 in kilograms) seen by Undercurrent.

Moreover, in 2018, only one auxiliary vessel for every two freezer tuna vessels will be authorized, as established by resolution 16/01 of the Indian Ocean Tuna Commission's plan for recovery of the yellowfin stock in the Indian Ocean.

Resolution 16/01 established a plan for the recovery of the yellowfin stock in the Indian Ocean, forcing its contracting parties to reduce their catches in 2017 and 2018 by 15% compared to the level of 2014, as well as to reduce the number of total fish aggregating devices for the purse-seine fleet.

The corresponding quota for the Spanish flagged fleet had set just over 45,680 metric tons. 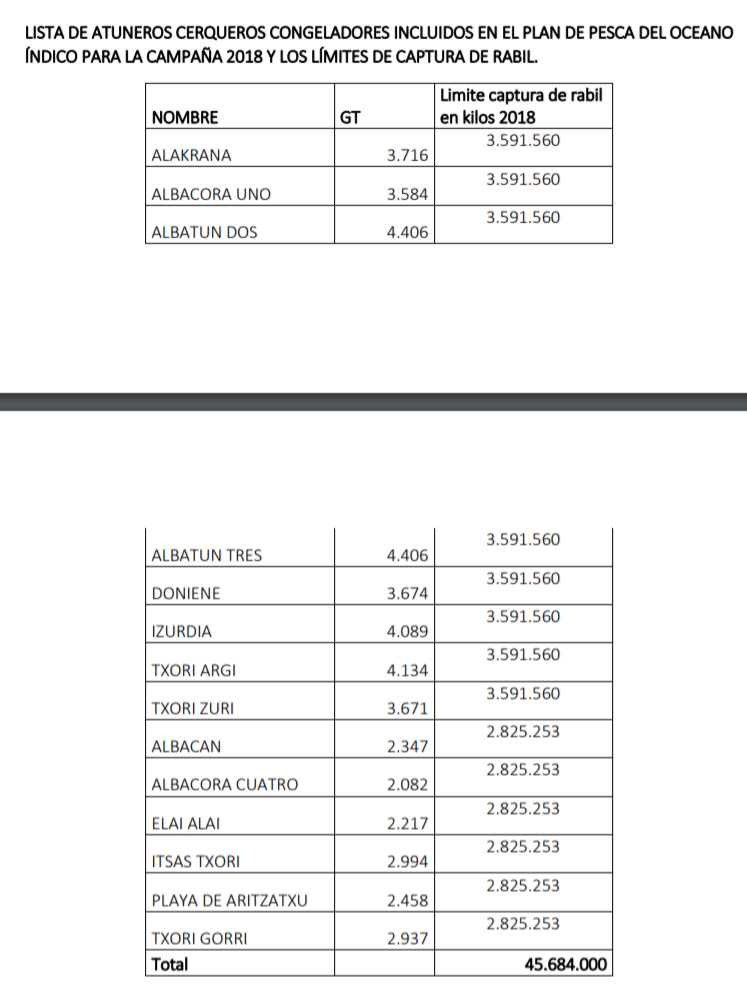